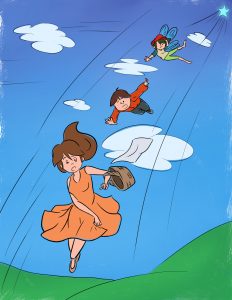 We are pleased to announce our first Children’s Story Laylas Wishes, staring Layla. A young fairy that sits on the top of a lamp post waiting for someone to and make a wish. Not just anyone, but a special person. Someone who believes in fairies and magic. In fact, Layla’s only job in the whole wide world is to grants wishes to those people who believe in her.

Today, Mummy and William were rushing to the shops to buy some eggs. As they were walking along Magic Lane, they both stepped on the Magic Stones. Together they stepped on the Magic Stones, they both made a wish. Mummy and William both wished for eggs. In fact, Mummy wanted to make a cake and William wanted to eat a chocolate egg.  Layla, hearing their wishes took them to the Land of the Chickens for their eggs. Join William and his Mummy as they meet some of the Chickens in the Land of the Chickens. All because Mumm wants to make a cake.

This Children’s Story is written by Julie C Farmer.  It is the first, of a series of books that discovers the world around us and the magic of our imagination.

‘I loved writing this children’s story; I have written business books, manuals and business instructions in the past.  Layla’s Wishes was a pleasant departure from writing facts.

I had the opportunity to let my imagination wander and create a world of the obscure.  I will be honest, a children’s story is a lot harder than it would first appear.  For example, the language needed for a small child to understand can be restricting.  On the other hand, the adult reading the children’s story needs to be suitably entertained as well.  However, I loved writing this story and am looking forward to the other children’s stories in the series.’

Why not join Layla and her wishes and you can pre-order your copy here.