It’s All About Love is the new book by Les Thompson. A Compendium of Short Stories that talk about love, loss and the human effect love can have.

Each story has a charming character-driven focus with a satisfying outcome. Les has taken some important issues from the older lady and added a modern twist to It’s All About Love.

Story one – Claire Over the Hill 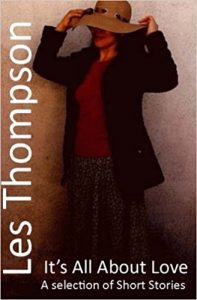 Meet Claire Haynes, a 42-year-old widow who lost her husband five years ago and was facing life on her own.  She then met Bill Egglestone, Mavis, Derek and Brian.

Andrew Wilson was a sergeant in the Army on a tour of duty in Afghanistan.  Hearing the sound of gunfire Andrew realised he was under attack.  He remembered feeling a sharp pain in his chest that slowly got worse. Now, his life is about to take a turn.

Gillian Foster was walking home very late one night from her girlfriends. It was a very cold and frosty night, and rapidly getting colder. She had intended to catch the last bus home. However, she forgot to put her watch on and missed the last bus home.

Gillian was twenty-five and was always uptight about everything. She had a very quick temper. Gillian since school had a lot of jobs but did not settle in any of them, and Gillian was always short of money

Story Four – For Richer or even Poorer

Emma Lewis was driving home from work very late one evening. Emma was a journalist who worked for a small local newspaper in this small west midland where she lived. As she arrived at the block of flats where she lived, she parked her car and walked towards her ground floor flat. When she got closer, she noticed what appeared to be a large bundle on her front doorstep. As she got closer, she realised it was a man. At first, she thought he was dead, then she heard groaning, and he moved.

John Everett was a man who loved the outdoors. If it was sunny or overcast, it didn’t matter to John. He never worried about the weather forecast. Why should he?

“You can’t control it” he always told himself.

He loved sports, football, cricket, running, jumping all appealed to John. As a child, when he got home from school after tea he always went over to the park to play. When he got older, he joined a football club and an athletics club. He always won cups and medals.

Alan Johnson arrived home late on Saturday night from his local pub. He was very unsteady on his feet after consuming a large amount of drink. Alan wasn’t a big drinker really. His wife had left him nearly two years ago, and it had left Alan, a very depressed man.

Reaching his house, he struggled to put his keys in the front door. After a long struggle, he finally succeeded. Opening the door, he went straight into the kitchen and put the kettle on. The headache he had was now getting much worse. Yes, a big drinker he was not!

It’s All About Love follows Les’ two previous books, his first ‘Portraits of Maureen’ a beautiful story about his wife and the love they shared. His second book ‘Opposites‘ tells the factious story of Rodger Peel.

For news and updates, why not subscribe to our newsletter.